A NEW TWIST ON DREDGING TACTICS 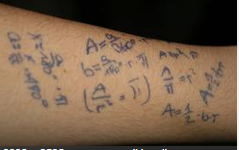 After church Sunday, I slipped off to the Amicalola to enjoy the warm day. I was greeted by 9 anglers on the water at 1 PM spread along the entire reach of the Highway 53 stretch. I walked around for a bit and talked to a few folks who reported getting skunked or only catching/ hooking one or two. I stuck waders on and was on the water by 1:45. There was a group of three guys working the long fast run 200 yards up from the canoe launch who mentioned getting skunked as I was gearing up. So, I decided that's where I was going to start.

I tried my standard Euro-nymphing rig first there and caught a couple of fish out of the shallow pockets in the sun towards the tailout. However, I found it very difficult to get down in the heart of the fast deep water up at the head of the pool with the Euro set up, even with my dredge rig of the long 6x leader. So I decided to try something that popped into my mind. It is, in a sense, very much like Dredger's long 8 lb. leader with an indicator but maybe a bit more extreme and modeled more after my 6x euro leader. I put my reel with a floating line on and got a new 7 ft. leader (I don't think it makes a difference what) and chopped it back to the part of the tapered leader where it is about 15 lb. test. Next, I added 4 ft. of 10 lb. test mono, which is what I applied the football indicator to so it would slide up and down.

From this stretch I made a "jam stop" of 5 overhand knots on top of each other to make a big thick part of leader. This serves two purposes, to keep the indicator from sliding all the way down. I've had it slide down before on leaders, even through knot sections. Also it allows you to easily set up the next part of the leader. I got a long 12-14 ft. section of 5x flourocarbon and made a clinch knot and slid it up over the jam stop and seated it down. At the other end, I surgeon knotted a 3 ft. section of 6x flourocarbon Trouthunter tippet. From there I did the traditional 2 fly rig with an unweighted leech and peach egg. I also put 2-3 split shot 12 inches above the first fly and kept it in place with an overhand knot between the shot and the fly. 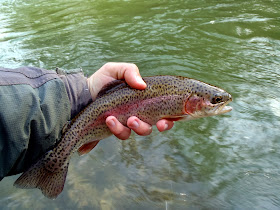 How did  this setup work there? Wonderfully! I hooked 19 fish in 2 hours out of that long run, all scrappy and hungry rainbows.  I've fished that run a good bit and even with Dredger's 8 lb. leader setup, it has seemed that I've had to use 4-6 split shot to get down there. Even then I felt like I could never get down deep enough in the heart of that run without making the leader ridiculously long and painful to cast. Yesterday was the first time I've ever felt like I fished that spot thoroughly well. This is a very extreme and specialized setup for limited spots but it sure worked well yesterday and maybe could on a couple spots on the Chattooga and the Toccoa DH.